'The power to destroy a planet is insignificant, compared to the power of the Force.' Darth Vader

WARNING: This is a long, fairly in-depth article. But it is on a subject I love very much: the Death Star.

I can remember being very excited about the release of the Death Star mobile system card. At last! I could recreate the most frightening weapon in the Imperial arsenal, and strike fear into the Rebels, nay, the entire galaxy. Of course, as a few attempts at constructing a Commence Primary Ignition deck went poorly, I as well as many other players moved on, a bit disappointed in the potential that wasn't realized.

A funny thing happened late last year; I began hearing reports of CPI decks showing up at tournaments. Not winning them, exactly, but putting on fine showings. This was great! A forgotten decktype reborn...and someone was making it work. The most exciting thing of all is that when Third Anthology releases, a CPI Objective will be included (which had better be a bang-up card, being the only Dark Side card in the bunch).

Maybe you've tried putting together a CPI deck? I hope to list the cards and tactics a CPI player can use to improve his game, and also provide some speculation as to what may improve about the deck once the new Objective releases.

First things first; the CPI Epic Event is the wheel that turns the entire deck. Let's take a look: Firstly, the CPI objective requires the Death Star (natch) as well as the Superlaser. You fire it during your control phase, utilizing the game text of the Epic Event. Then, adding the Death Star sites where Rebels have no presence and subtracting either the number of sites at the planet the Death Star is attempting to blow up or the number of sites at a Rebel base (Yavin IV or Hoth). If you can exceed 8, well, BOOM! The 'Happy Fun Ball', as the Death Star is lovingly referred to, is well fed--the planet is naught but a parsec memory, and if it was Yavin IV or Hoth, the opponent is in for some hefty force loss based on the number of LS Icons at the planet and its related sites. That tends to sting just a little bit.

As you can see, though, if the planet you are blowing away has lots of sites (or if there are lots of Rebel Base sites in play), or if Rebels board the Death Star, your odds of smashing the planet you're aiming for diminish. Fortunately, most of the Death Star sites provide no icons for the LS. Excellent! The docking bay is the only location of note providing LS icons, which the Dark Side player is free to deploy or leave out altogether. Some of the more important sites would be the Death Star Conference Room, War Room, and Central Core. The Conference Room provides an extra +1 to your Epic draw if you have a leader there. Thankfully, the Dark Side is not at a loss for leaders! The War Room is important because it provides 2 for the Dark Side--force will be a precious commodity as you try to blow away your opponent's planet.

The Central Core is important for a different reason. A New Hope also quietly released a little droid that was a great secret; R3-T6. If you park him at the Core, suddenly the slothful Death Star, with its hyperspeed of 1, becomes a bit faster with a hyperspeed of two. This is tremendous as it allows the Death Star to cross the galaxy in half the time! There are going to be times when you need to speed off to Tatooine or Dagobah--put this little droid with the lead foot in charge and you'll be there much faster--to lay the planetary smackdown on those ragtag Rebels.

Even if you have these sites, Rebel spies such as Boussh or Momaw Nadon (amongst other treacherous LS sneaks) may still find themselves drinking tea with Tarkin at the Conference Room, snipering your defenseless R3-T6, or just generally causing a Rebel ruckuss. That is why it is important to carry a little spy protection to help airtight your Death Star. Ephant Mon, while an alien in the charge of Jabba, will work for the Empire if the price is right. This nifty alien prevents spies, gamblers, and thieves from coming into his domain. This is simply too sweet! Now Lando and Han will find themselves locked out along with Boussh, and this is crucial if you want to guard your Death Star and keep your Epic Event count up. Some other good cards to include would be Hutt Smooch (for capturing spies outright, even before any other characters can deploy there), Imperial Barrier (to keep a spy right where you want them), and I'd Just As Soon Kiss A Wookie (bounce the Undercover back to their hand, or any support characters, for a serious Y2J beating). Toss in an Imperial Arrest Order, and those Rebels will be unable to Nabrun in.

Still, it would seem that the Death Star needs more help, especially if there are several Rebel sites lowering your count. Death Star gunners are weak little scrubs but in your CPI deck they will be invaluable! Limited to 3 per table, they CUMULATIVELY add 2 each to CPI. That's a bonus of six that will put you over the top. By keeping the Rebels outside the Death Star, the gunners will be fairly safe--to do the Empire's nasty work. As a bonus, you can send one to the used pile to hunt down the Superlaser--the tool of the Empire's wrath. If you toss in cards like The Dark Path (examine the top three cards and lose two of them) or easy recyclers like Shocker or Masterful Move, you should have no problem lowering the booma, so to speak.

Cap off this celebration by making it 'A Day Long Remembered'...if Obi-Wan isn't in play, and you trash Yavin IV or Hoth, all Rebles and Rebel Starships become deploy +8 and lose immunity to attrition. Kill two birds with one stone if Obi was hiding out at the Rebel Base, teaching 'the whiner' a thing or two about the Force.

Vader warned about putting too much faith in the techno-logical terror, and so too should the CPI players be aware of tricks the Rebels can pull to slow or stop the Fun Ball threat. The Light Side will be receiving an Attack Run Objective in 3rd Anthology; while not wishing to ruin it here for the uninformed it is something for the Dark Side to be aware of and be prepared to adapt to. A good solid space fleet is also necessary, as you don't want to be losing 3 per turn at the Death Star. It's wonderful, then, that the Empire can bankroll those mercenaries Fett, Iggy, Dengar, Zuckuss, et al, along with some Dreadnaughts, to pack a serious fleet with fewer cards than the Light Side needs. This was not the case before the last two Enhanced Expansions, but thankfully now this has been rememdied.

There were two counter cards printed for the CPI deck; Commence Recharging and They're on Dantooine. They're on Dantooine requires Dantooine to be on the table--an unlikely scenario unless LS is playing Hidden Base. Commence Recharging is trickier; it requires the Superlaser to 'acquire' 8 force before firing. Needless to say, there are going to be times when any delay in smashing a planet is unacceptable. That's why I love this little gem: Point Man. Not only does it cancel both They're on Dantooine and Commence Recharging, it also nails other usual suspects like Demotion, Asteroid Sanctuary, Scramble, Order to Engage...wow! Toss in the fact it's a destiny 5 and you have a natural candidate for this deck (maybe even two of 'em). In fact, as Order to Engage and Scramble resurge in popularity, it might be wise to pack one anyway

So what for an encore? This deck is great against a single planet strategy like Profit or Training. You can literally end the game with the firing of a Superlaser, no matter how much force is left in their deck. A Broken Concentration will allow you to move one of their Force back (which may even be the only force they get!), probably inciting them to scoop up their cards and resign. But in a tournament, even in defeat a player will often not draw up for you...better find a method of killing them off. I personally like Ability, Ability, Ability--if they can't deploy a character with ability, they'll take two force loss at the end of each of their turns.

Playing Hidden Base is more problematic; you're going to have your hands full no matter what and the first planet you destroy will likely only be a warm up act. If Hidden Base is popular in your area, the number of CPI's you'll need will rise sharply, as well as your space presence. Finishing off a Hidden Base deck may be the toughest--thankfully the Superlaser can pull double duty, offing Capital ships like the Redemption, Tantive IV, Spiral, e.t.c. Oddly enough, you can Sniper with the Superlaser (though how the Death Star ever sneaks up on ANYTHING is a miracle, indeed!)

Narrowing your selection to sixty cards will be tough, but be sure to include these guys. The new objective may make getting them out much easier, which will allow you to play with fewer of the necessary cards. If the CPI objective allows for fishing out Death Star sites...watch out Rebellion.

There will probably be a balancing aspect to the card--I'm guessing Force draining on the Death Star will be out, along with some restriction on Scanning Crew (a growing trend) and possibly capping your activation, so you can't abuse the objective to build a DS Force Choke deck that also happens to include some CPI stuff as an extra.

At any rate, the galaxy's about to get a whole lot more dangerous. Hopefully you will be able to use the doctrine of fear to keep those Rebels in line.

See you at the card store! 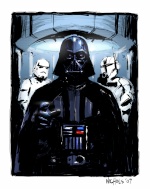